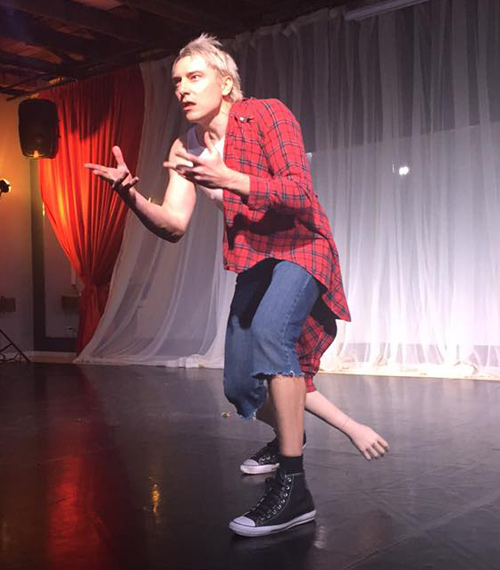 Thank you everyone who came out last night to the monthly insanity at Ventura’s 5x5x5 Show! Such a wild night! The crowd was on fire, the performer lineup was inspiring (looking at you, Pete Ippel), and I had the chance to unveil You’re So Nice, a new piece about the tendency to keep negativity bottled up. Nice was originally slated to be part of a one-man show I had hoped to have finished by now, but my grad school workload has been heavier than I’d hoped, which is also why these blog posts have been far and few between.

This is the first time I’ve mentioned school here, in part because my impending degree has little to do with aesthetics (at first glance, anyway), and I’ve wanted to reserve this space for more uber-right-brained activities. But it’s high-time I outed myself: my “day job” involves working in cybersecurity.

Security’s been a lifelong interest. Even as a kid, I always had my nose in books about spies, criminal capers, the FBI, lockpicking, etc. My technical background started in the mid-1980s when I taught myself programming and joined a hacker/phreaker gang as a young teen. After getting scared straight by my own FBI encounter, I began working above-board in the security field in the 1990s. Since then, I’ve worked as a consultant, security architect, and hacker for 4 Fortune 500 companies (and counting), with an average stay of 4.5 years at each.

It’s a challenging balance, pulling fish out of my performance-art-pants at night, then wearing a poker face at a job where I’m tasked with fending off thousands of online attack attempts per day from amateur and state-sponsored hackers alike. A few of my co-workers know of my double life, but like any good spook, I’ve tried to keep a low profile; patients might prefer not knowing that their doctor rolls around in broken glass on weekends.

My take, however, is that cracking systems can be a creative act — which you know if you read my novel — and so hackers/crackers are often a very creative bunch. The very term “hacker” denotes someone inventive, whether it be in computers, turning toasters into telephones, or some other wacky trade. It follows that in order to “deflect” these creative people from wreaking digital havoc, defenders must be creative themselves, and be capable of seeing what hasn’t been shown (or even imagined) yet. The best defenders are, in many ways, visionaries capable of “seeing” the road long before any dirt has been moved. This is why it pays to exercise the right-brain by embracing occasional insanity to foster new synaptic routes orthogonal to Security’s inbred patterns.

I’ll finish my Security M.S. degree this December, and I’m increasingly realizing ways I might “hack” the subject of cybersecurity itself, with lessons learned from performance art. Who says the two subjects can’t inform each other? Playable glitches have been intentionally introduced into video games as an art form, so why can’t performance art “infect” cybersecurity as a new approach, a new way of thinking? And the converse can also be true. Security is very much about detecting what is breached, hidden, or taken; why can’t these apply to the performer-audience relationship in some explicit ways as well—or even be the focus of a performance?

Frankly—and I’m wagering every artist/performer who works a corporate day job can sympathize—I’ve been nervous for years that potential employers might discover my other work, and shy away from hiring me—but no more. How can I publicly pursue the intersection of art and security if I hide the fact that they already intersect for me intuitively? And really, why shouldn’t art and technology trade inspiration? They both come from the same brain, after all, in my case.

So, dear potential employers, please hire me for my cybersecurity skillzand consider the fish in my pants a bonus.

This entry was posted on Sunday, March 6th, 2016 at 7:52 pm and is filed under Confessions, Cybersecurity, Performance art, Weird. You can follow any responses to this entry through the RSS 2.0 feed.

4 Responses to “A Little Security”