A Performance Artist’s Year of the Sheep 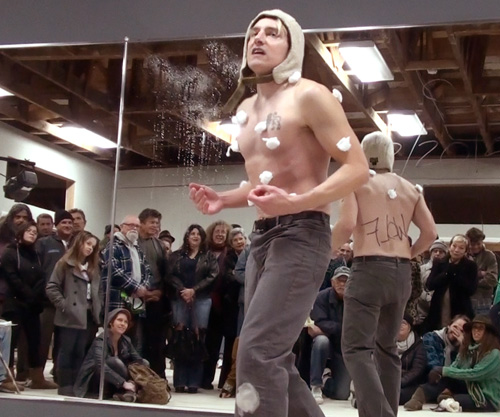 Performance artists (like standup comedians) believe that performing within a day of January 1st is mandatory if you want to ensure good luck for the coming year.

I can’t remember who first handed me this superstition, but I obey it religiously, though, I’ll admit, sometimes with a last-minute scramble to find an available stage or mic with the year’s final hours dwindling. It doesn’t have to be a pro venue, mind you; performing three minutes in a watering hole or an alley for a few drunken cohorts earns you the Karma.

My 2015 started with a healthy dose of luck: the photo above was taken during Doppelganger, a performance to celebrate Year of the Sheep at the beautiful new ALoft Gallery in Ventura, California on January 2nd.

(I don’t always perform in front of mirrors, but when I do, I like to scribble WOLF on my back and dress up like a Dutch girl covered in cottonballs).

For me, the Sheep arrives right on time as a reminder of the Bruegel parades of blind leading the blind, with the most glaring example perhaps being the screaming pitch of shitty throwaway culture and memes now born, mindlessly traded, and then discarded at terrifying Internet speeds—and I’m as culpable as anyone for adding to the bright-n-shiny baubles that increasingly distract us from digging in to become something greater.

Forget mere loss of spirituality; I’m talking about the forgetting of something far more primal: what it feels like to be a living alien creature, evolved but still part animal, now imbued with the potential to imagine and dream, inventing rituals as we go, conversing with plants and stars, on a planet spinning through cold, empty space. Maybe I’m not alone. Do you feel it? Your primordial ancestors beckoning to you through your DNA to remember what magic feels like? The call to invent from the gaping maw of nothing instead of just consume?

I drove to Arizona last month. At the risk of sounding like a mid-life-crisis Burner cliché, the time I spent in that rugged expanse of desert emptiness pried me open with an irresistible call to reconnect with my primality and instincts that have been rendered barely detectable beneath the raging din of commercial, political, technological, and dilettante clutter.

Your list of resolutions for 2015 may be long, but if you’re inclined, maybe scribble somewhere near the top:

Alone in the dirt with a drum and a bone.

This entry was posted on Monday, January 5th, 2015 at 3:31 pm and is filed under Los Angeles, Magic, Performance art, Writing. You can follow any responses to this entry through the RSS 2.0 feed.

2 Responses to “A Performance Artist’s Year of the Sheep”