The awards ceremony will be held May 28 in NYC just a day before the kickoff of the BookExpo book convention. I can’t wait! Thanks so much to everyone who helped make this little dream come true!

***UPDATE: The ceremony was a blast! Held at NYC’s historic Providence space—it was once a church, then became a lavish recording studio where Sinatra, Hendrix, Streisand and Stevie Wonder all recorded—seeing my name in lights was surreal. There were two floors with views of the stage, but not enough guest tables, so a lot of attendees had to stand around with their plates of food, including the people on the second floor, who thought it was a good idea to balance their plates on the balcony railing. Every few minutes I’d see a cracker or piece of cheese fall onto the head or plate of a guest below. That—and being there with my hilarious & gorgeous wife—were my favorite parts of the night (you can see where my priorities are, I guess—haha). 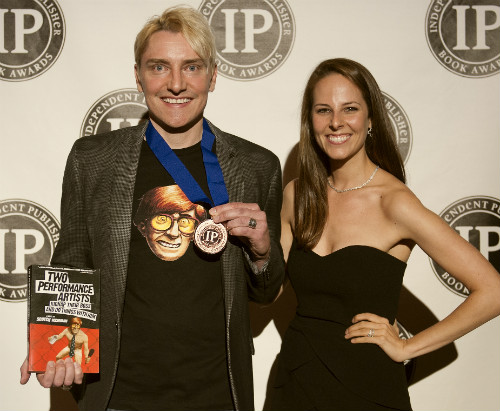 This entry was posted on Tuesday, May 6th, 2014 at 4:11 pm and is filed under Book Tour, Performance art, San Francisco, Writing. You can follow any responses to this entry through the RSS 2.0 feed.