NEWSFLASH: I’ll be protesting SHIA LABEOUF’s plagiarizing ass tomorrow/Thursday Feb. 13th outside the art gallery where he’s doing his #IAMSORRY “performance.” Stop on by anytime from 11am until 5pm and join in the craziness! Wear your favorite #lunchbagfashion! Cohen Gallery, 7354 Beverly Blvd.

UPDATE (2/13/14): The experience was incredible. WOW. *Thank you* to all of the friends, Hippos, family, and *new* friends for holding me up during today’s protest and #LABEEF performance. The huge crowd — some 300 people who’d been there 8 hrs or more — was empathetic, encouraging, and full of original POVs on Shia, his spectacle, and celebrity. I learned so much, and was blown away by the support—thank you.

Part of my performance (photos here) involved wearing a paper bag with the words #WE WERE NEVER FAMOUS printed on it, and using black duct tape to affix a beef patty to the top of each of my shoes (thanks for the discount, Burger King!). The beef was a reference to interviews LaBeouf has given in which he’s stated that his last name originates from barely-literate French ancestors who couldn’t properly spell the French word for “beef” (boeuf). I’d originally planned to use only one beef patty, but then decided to use two, with the second foot “plagiarizing” the first. And the pieces of black tape served as funerary stripes, like black arm bands, to mourn the slow death of LaBeouf’s originality.

I also ripped out pages from copies of LaBeouf’s zine Cyclical, signed them SCOTCH, and gave them away as souvenirs — my favorite gesture of all, and the crowd seemed to love it.

I was especially moved when, after hearing my story, several people throughout the day offered to let me take their places in line so I could confront LaBeouf directly, even though they’d been waiting for over 5 hours. I was grateful, but couldn’t do it. In order for the #apology to be sincere, I felt LaBeouf needed to come to me. I’d notified the gallery that I would be outside, and that LaBeouf was welcome to come out and apologize to me directly—his army of bodyguards were welcome too!—but he didn’t make an appearance.

Thanks to Jake Perlman at Entertainment Weekly for his fine interview, to KPFK’s talented Jasmine Broderick for talking with me, and to Pop Culture Beast‘s Kari Tervo for her great coverage. 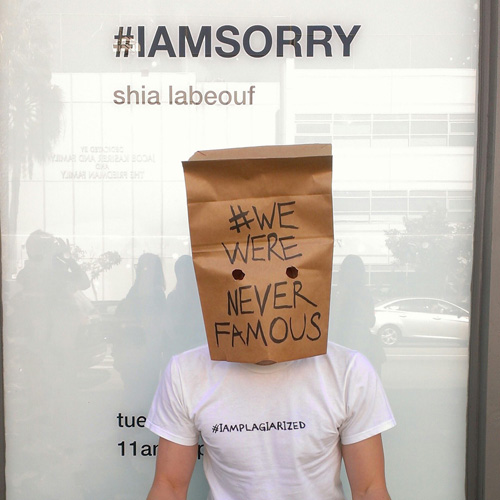 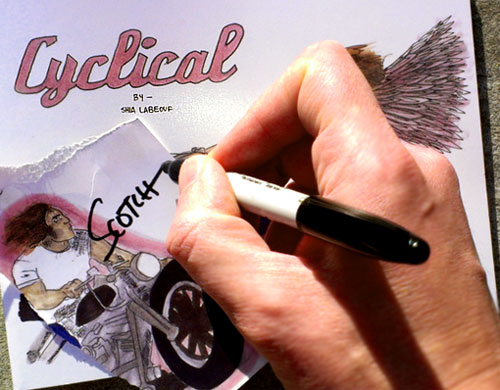 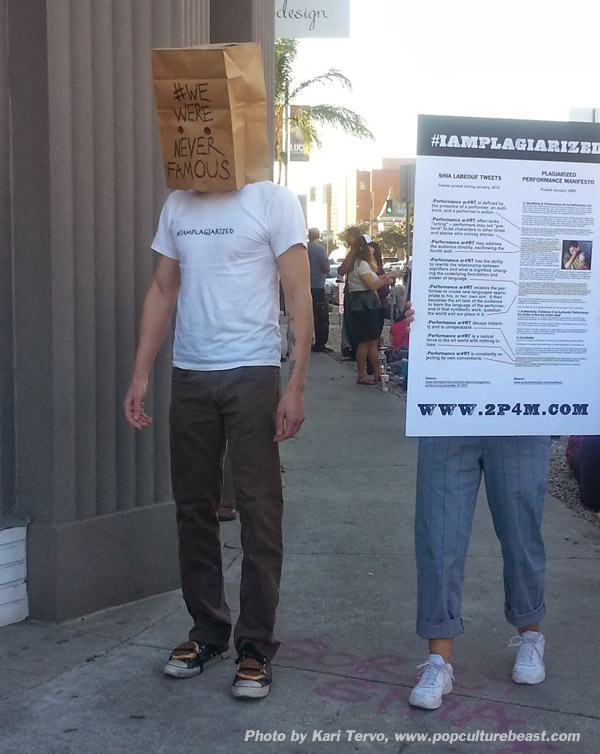 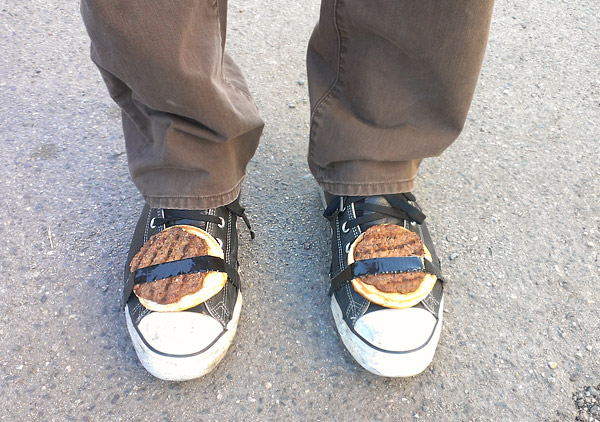 Two friends of mine warned me not to let Shia steal my magic, nor my “magic wand.” Haha.

Worry not: LaBeoufs everywhere want nothing to do with magic. From my forthcoming biography, Shia: An Unauthorized Life:

Shia’s French forefathers were, by all accounts, country clodhoppers and barely literate. Cattle breeders by trade, they worked barefoot in the dung over 20 hectares of pasture just south of Montagnol.

The French word for steer was la boeuf, which, unsurprisingly, was also slang for the male organ. When a breeder went into town, he’d try to entice women with crass jokes about his beouf — accidentally misspelled, of course, and therefore mispronounced — to which the women would respond with glee: “n’existe pas, votre beouf!”

Confused, the breeder would report back to the other pasturemen that women had found his beef to be imaginary. Over time, the men became convinced that they’d been cursed with genitalia that only they could see (or smell). Frustrated, they stopped courting women. Known collectively as Les Beoufs, these beef bachelors passed the time by inventing elaborate pasture dances that consisted of leaping long distances in order to hump the air.

If, by pure luck, a breeder did manage to marry, his refusal to wear shoes or bathe made sex unthinkable. If his wife wanted a baby, she would write allemagne — the French word for Germany — on a paper and give it to her husband. Sounding out the letters, the husband would incorrectly render it as “aller magne” — literally, “to go to magne.”

Magne was, of course, a homophone for the English word ‘man’, but more importantly, it contained the prefix mag, from the old Greek magos, which signified a special male member of the priestly class — that is, not just a class ‘member’ (sexually and organizationally speaking), but a special one: namely, a magician or male witch. The husband understood that magic must be necessary in order to conceive a child — how else could it occur?

Reluctant to get too close to occult practices, the husband would take his wife to the train station at Montagnol, where she would show the allemagne paper to the conductor. The conductor would laugh, but faithfully charge the couple for a ticket to Frankfurt — a party town packed with German sailors on leave — and off the wife would go, away to ‘the magician’, the husband believed, only to return weeks later, happy as a clam, and of course, very pregnant.

And so it came to pass that Shia would hail from a long line of bastards who knew nothing of magic — but plenty about fruitless humping.

This entry was posted on Wednesday, February 12th, 2014 at 6:06 pm and is filed under Los Angeles, Performance art, Shia LaBeouf. You can follow any responses to this entry through the RSS 2.0 feed.