The book tour has been racing ahead full steam, with exciting stops in LA, Fresno, San Francisco, Portland, Seattle, and this week, Washington D.C.

Though I’ve said it before, I’m still shocked at just how few indie bookstores remain compared to 10 or 20 years ago, with so many replaced by soulless stucco-and-glass monoliths. Thank the gods for indies—or better, go buy some books from them!

With so few non-chain bookstores remaining, and their calendars so packed with authors hungry for stage time, and their budgets continuing to thin (some have elminated book readings altogether because they can no longer afford event & marketing costs), traditional book tours are becoming a rarity. Even Barnes and Noble stores were an impassable challenge, which we tried to book in towns where there wasn’t a single indie bookstore left. Some B&Ns no longer hosted readings at all, it turned out, while the others were just too disorganized to recall a conversation from one phone call to the next, until time finally ran out.

But that doesn’t mean Book Tours are dead. Far from it. The thriving indie bookstores we booked were a dream. Skylight Books & Book Soup in LA—and my San Francisco favorite, Green Apple Books, with its old creaky floors & eclectic selection—pulled out all the stops, with mobs showing up crazy-excited for a performance art novel. (Full disclosure: though I’d like to think it was all due to my book’s appeal, part of the draw might’ve been rumors preceding me that I do wild things with a fish during my readings, but I’ll take crowds however I can get them!!!) 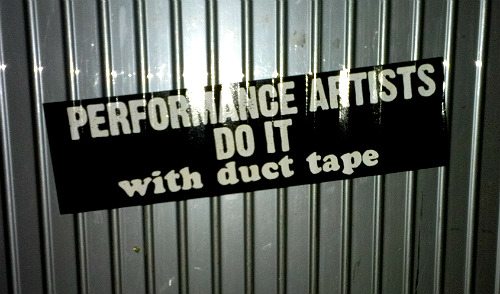 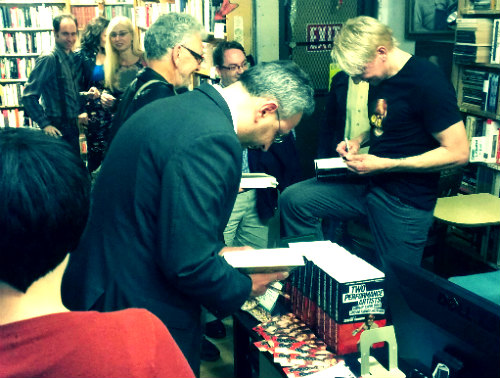 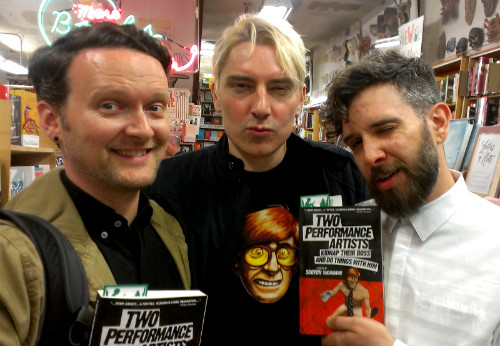 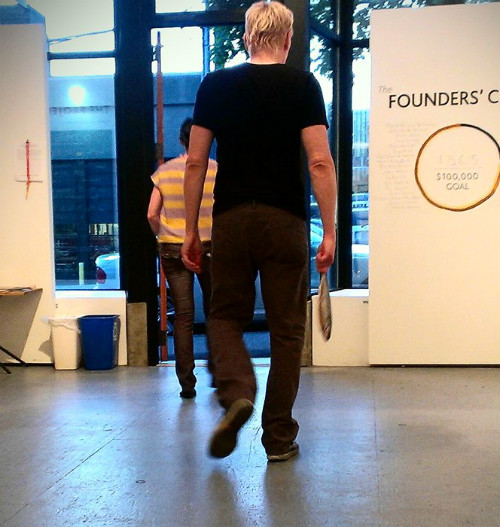 With the novel being about art & performance, we were also able to book some killer art, gallery, and alternative theater spaces, thanks to curators who were game.  SoapCo. Gallery & Theater in Fresno’s Tower District, Mermaids Tattoo in SF, the Show & Tell Gallery in Portland, and Seattle’s The Project Room were not only white hot creative collaborators up for anything, but also fitting for a novel about two subversives who unleash peformances in sweaty underground galleries where art spectators go increasingly mad for performances that shred convention. Finding a way, hell or high water, to still get the book out felt like dancing amid the publishing industry’s ruins—and fucking punk rock performance art.

One of my favorite events was the tattoo happening at Mermaids Tattoo in SF. The evening began with a hilarious standup comedy set by SF favorite Loren Kraut, then a performance art piece by yours truly. Then came the finale: with the audience watching, Mermaids’ owner-and-tattoo-artist Anne Williams inked a tattoo that’s described in my novel onto my torso while my wife read the chapter aloud. It was surreal, grimacing under the buzzing needle while hearing my words echoed back to me. In the novel, protagonist Hank tries to tattoo himself while wearing a vest made of meat that’s being attacked by a massive dog; in the interests of public safety and my needle’s sterility, I forewent the meat and mutt. 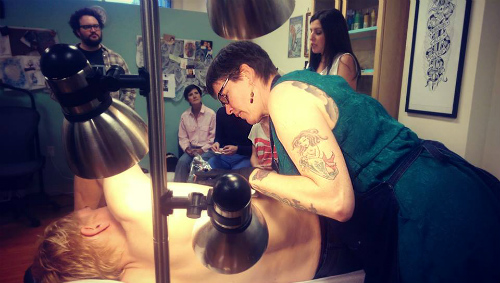 You can catch more photos on the book tour’s web page.

This entry was posted on Saturday, May 24th, 2014 at 8:45 pm and is filed under Book Tour, Los Angeles, Performance art, San Francisco, Weird, Writing. You can follow any responses to this entry through the RSS 2.0 feed.